To mark World Wide Knit in Public Day (yes, it’s a real thing), I’m running a little competition that combines my love of reading and writing with my love of knitting, crochet and birds. I’m calling it Literary Birds and here’s how it works.

I’ve knitted two sets of birds inspired by great books by Australian women writers, and my own novel, Mother of Pearl. To win one of the two sets, all you have to do is post a review of Mother of Pearl. It doesn’t have to be a long review (a sentence or two is fine) or a rave review (though feel free to rave if so inclined). You can post to your blog or instagram account, Goodreads, Booktopia, Amazon, or wherever you normally review books. Once you’ve posted your review, tweet the link and tag me on Twitter @angsavage, or tag me on Instagram @angela_savage_author or send the link to me via email angelasavageos(at)gmail.com

Everyone who writes a review gets their name put into a hat. Multiple postings of reviews gets you multiple entries, e.g. post to both Goodreads and Instagram and receive two entries. I will draw two winners at random and mail the birds to you free of charge. Overseas entries welcome. Entries close midnight on Friday 24 July 2020.

Here are the birds and the books that inspired them. Literary Birds Set 1 contains: 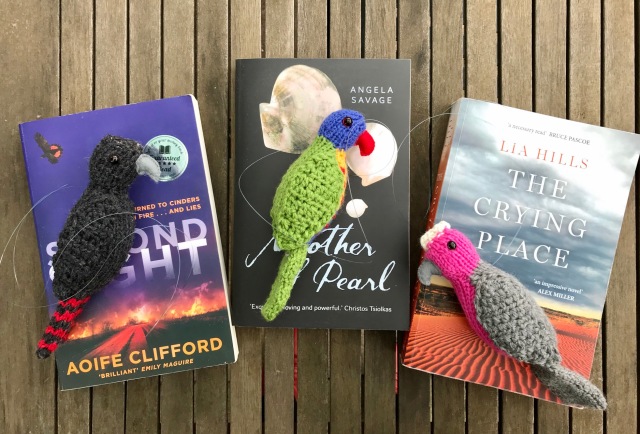 Red-tailed black cockatoo: This beautiful parrot features in Melbourne crime writer Aoife Clifford’s wonderful second novel Second Sight. We first meet the bird in a flashback to New Year’s Even 1996, when schoolgirls Amy and Grace — who later disappears — are in the bush at night: ‘A loud mournful scream from overhead made [Amy] jump… ‘That’s a black cockatoo flying over from Main Beach,’ came Grace’s voice. ‘Another one bothered by the bonfire and the crowd.’ Amy switched the torch back on. ‘If there’s a flock of them it means that rain’s coming,’ said Grace.’

Rainbow lorikeet: My novel Mother of Pearl is partly set in Melbourne during the drought of 2008-09; one of the characters, Meg, reflects on the presence of birds that she didn’t see growing up, including rainbow lorikeets, that ‘flocked to the city’s flowering scrub like poor relatives fleeing the countryside.’ In chapter 48, an interaction between a company of rainbow lorikeets and a lone wattle bird serves to shed light on Meg’s emotions as she thinks about the surrogate mother who is carrying her baby.

Galah: Birds and bird noises permeate The Crying Place, Lia Hills’s poignant and powerful debut novel, set on country in Australia’s Western Desert. Lia narrated an early draft of the book using a dictaphone, which picked up and transliterated sounds made by birds, animals, even the wind. And so in chapter 60, ‘Edge edge, taunted a galah from a battered eucalypt. It flew off, a dog’s muzzle monitoring its arc and that of the pink and grey squadron that joined it.’ 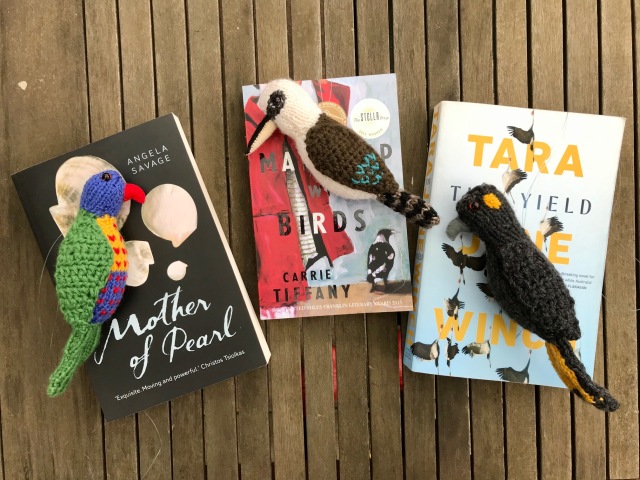 Both Literary Birds sets contain a Rainbow lorikeet, as featured in Mother of Pearl. In addition, Set 2 also features:

Kookaburra: Carrie Tiffany’s award-winning novel Mateship With Birds opens with an account of several dramatic magpie swooping incidents. But most memorable is the kookaburra family that lives on the diary farm in Cohuna where the story is set. Harry, the farmer, keeps notes on the kookaburra family in the spare column of an old milk ledger: ‘The day starts in their throats. / Dad first, then Mum, / Tiny and Club-Toe. / The four of them in the red gum / by the diary. / As regular as clockwork / they make their request for air.’

Yellow-tailed black cockatoo — bilirr in Wiradjuri language — is one of many birds that feature in Tara June Winch’s award winning novel The Yield. In the Wiradjuri dictionary entries written by Albert Gondiwindi that form one strand of this stunning narrative, he describes the bilirr as ‘a magnificent bird, strong, eagle-wise. Black as a fire pit, the yellow feathers in the tail visible in flight. I saw the yellow-tailed black cockatoo all my life. All the Gondiwindi loved bilirr. Before Prosperous Farm my mummy was living in Tent Town four miles downstream, where she birthed me there on the flat warm sand, below the caw of bilirr.’

Remember, it’s only the birds, not the books, that are up for grabs. But I recommend you get hold of the books, as they are all excellent reads.

Any questions? — Use the comments section below.

6 Responses to Literary Birds: A competition