SheKilda 3…where a criminally good time was had by all

This post is based on an article that appeared on the Sisters in Crime Australia website, with editorial comments as noted. 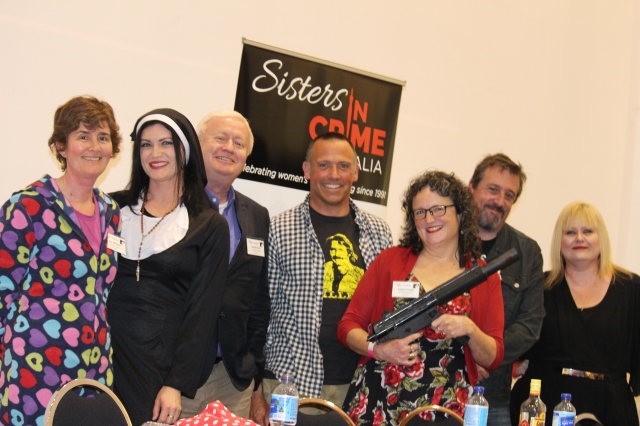 Sisters in Crime President, Vivienne Colmer, said SheKilda3 had exceeded the wildest expectation of the organisers.

“Authors and crime buffs came all over the country – from Cairns to Hobart, Sydney to Perth – with everyone commenting on the stimulating debates, both on stage and elsewhere. The authors and other speakers raved about how inspiring it was to get together with their peers – on both a professional and social level. One author declared it was ‘life-changing’.

“Authors talked eloquently about their books and their works-in-progress and even ideas for new projects they got just from attending. It was exciting to see how many professional connections between writers, editors, publishers and producers were forged,” she said.

“The hall looked amazing with scarlet stilettos big and small everywhere we looked. Everyone felt welcomed, whether they were veterans or newbies.”

Participants complimented Sisters in Crime on the excellent organisation and “top-class” panels. Author Maryanne Ross described SheKilda 3 as “the absolute best writers’ event I have been to for many years… great value for a writer (other writers’ festivals are really for readers) – eight high quality panels very insightful re writing process, with deep discussions about challenges and how they were overcome, as well as exploring personal courage. Also, great networking with other writers at all stages of their careers.”

[Ed’s note: I had the great pleasure of chairing a panel on Domestic Noir, featuring three of my favourite local writers of the sub-genre: Wendy James, Honey Brown and Anna George. As well as discussing its antecedents, we also speculated on the current popularity of domestic noir, which Anna linked to women’s ambivalence about power and the gains we have and haven’t made in recent decades. Other memorable lines: “Domestic violence is the underbelly of romantic love” (Anna George); “To be a creative person you need to have a dodgy moral compass” (Honey Brown); and Wendy James on why she struggles to see her work as ‘noir’ in the classic sense: “I’m writing about women in dressing gowns that aren’t see-through!”] 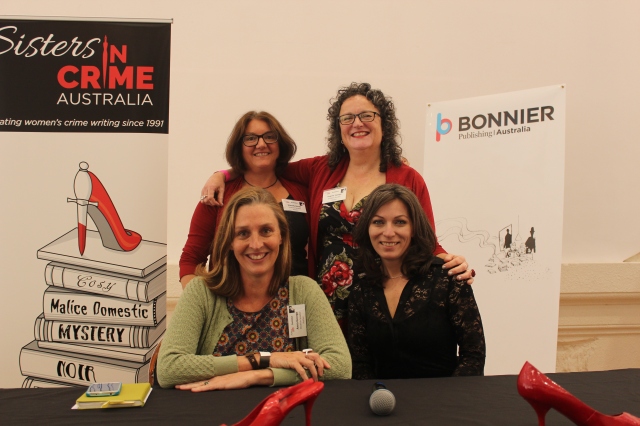 SheKilda3 was actually a day and a bit with crime writing workshops run by Ellie Marney and Professor Christina Lee at St Kilda Library on Friday afternoon. Everyone got into the mood for the convention with an engrossing session early Friday evening with Melina Marchetta, the YA author who has just turned to (adult) crime. (Catch up with Sue Turnbull’s review if you missed the session).

The pitching sessions to the publishers were a popular addition with 21 women and two men pitching to five publishers. The pitching session to the producers was also great fun and allowed everyone to dream bigger than their novel. All sorts of possibilities may ensue. One producer pitched to two authors during a smoko on the Town Hall lawn. Another producer has asked for a list of all the ‘pitchees’.

In her opening address, Vivienne acknowledged Janelle Colquhoun, Sisters in Crime’s Queensland convenor, who travelled from Brisbane, and Rose Stone (below), a founding member who turns 95 in March and until recently rarely missed an event. As Vivienne said, “Clearly having a criminally good time keeps the ageing process at bay.” (Click shekilda3-welcome-vivienne-colmer for the full speech.) [Ed’s note: I was delighted to meet and talk with Rose, whose main tip for a long life was to have fun]. 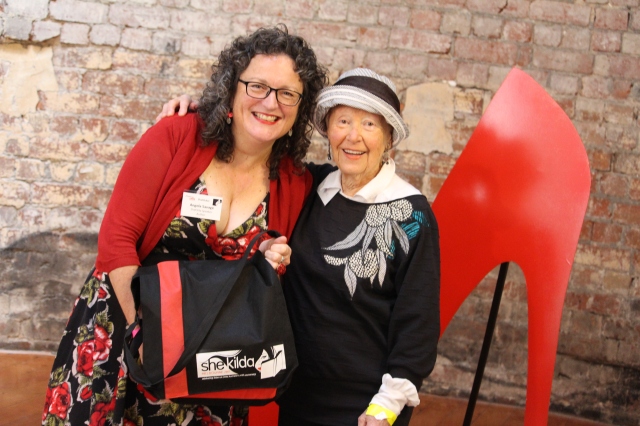 Me with my new nonagenarian role model Rose Stone.

Professor Sue Turnbull presented the keynote address about the state of Australian women’s crime writing (click shekilda3-keynote-address-sue-turnbull to read) and, to her surprise, was presented with a Life Membership and also made Sisters in Crime’s inaugural ambassador. Sue’s colleagues at the University of Wollongong are apparently now referring to her as ‘your excellency’.

Leigh Redhead took issue with Dicks’ Team Leader Robert Gott whom, she said, had claimed that Leigh had won previous debates by wearing low cut frocks and flashing her breasts. She donned a nun’s habit and then quoted Seneca! Robert almost brought the house down when he told Leigh he had attended a Christian Brothers’ College, with the implication that the nun’s habit wasn’t so much a turn-off, as a turn-on…

The Dicks’ team was the best ever assembled for a Sisters in Crime event but the Dames narrowly won when it came to the clapometer. Now everyone wants to buy Andrew Nette’s hard-boiled cookbook!

[Ed’s note: As compere of the debate, I’m sorry in retrospect that I didn’t call it a draw; definitely the best Dicks this Sister has ever seen. Just look at the audience reaction in the photos below.] 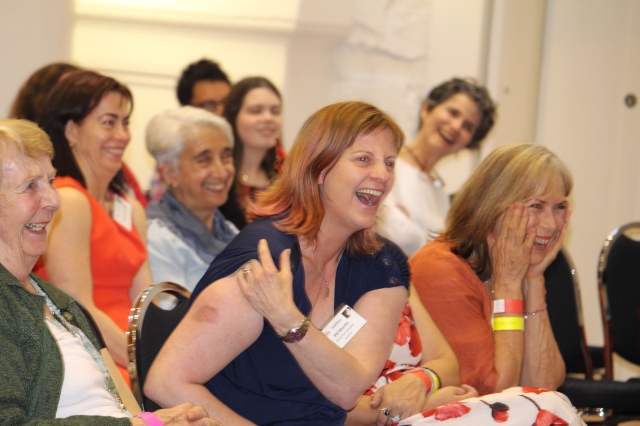 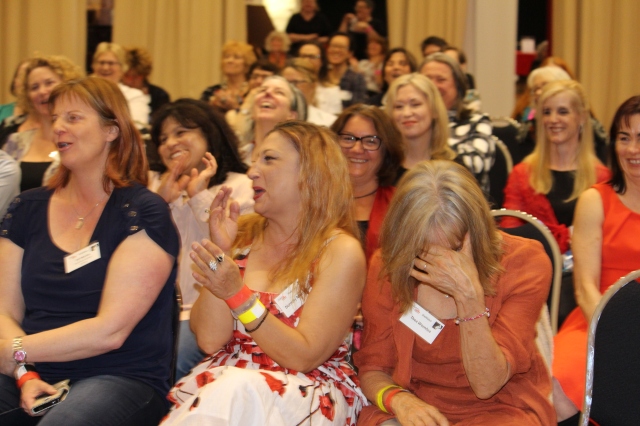 SheKilda3 climaxed in the Scarlet Stiletto Awards for short stories. Nicole da Silva (Frankie in Wentworth) won everyone’s hearts with her honesty, charm and commitment to stories told by women for women. She has recently set up a production company to get more women’s stories to the screen.

The Scarlet Stiletto Awards reminded us again how crucial they have been in providing a springboard for emerging women writers. It was particularly inspiring to hear how Year 12 student Jenny Chen [Youth Award Runner Up] decided to enter after a school visit from Cate Kennedy, the doyen Australian short story writers, who got her start by winning the first – and then the second – Scarlet Stiletto Awards back in 1994 and 1995.

All panels were videoed by long-time Sisters in Crime member Leslie-Falkiner-Rose and her daughter Zarah. Filmmaker Pippa Wischer interviewed a number authors for her film project, A Murder of Crime Writers [Ed’s note: I was thrilled to be part of this and can’t wait to see the finished project]. Her colleague Nick did vox pops with convention-goers about Sisters in Crime. Videos and podcasts will available in the New Year.

A reliable source informs us that the last SheKilda3 attendees standing were still laughing and singing at 4am… [Alas, I was not among them: after teaching in Geelong the day before, and being at SheKilda to chair a panel, compere the Great Debate, and launch the Scarlet Stiletto e-books, I crashed early.]

See here for my Scarlet Stiletto e-book launch speech; and here to buy the books.