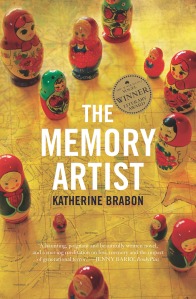 Earlier this week, Katherine (Kate) Brabon was announced as winner of the 2016 Vogel Literary Award for her unpublished novel, The Memory Artist.

The way the award is organised meant that less than 24 hours later, Kate became a published author: The Memory Artist, released by Allen & Unwin, was available in bookshops the day after the announcement.

Here’s the back cover blurb:

Pasha Ivanov is a child of the Freeze, born in Moscow during Brezhnev’s repressive rule over the Soviet Union. As a small child, Pasha sat at the kitchen table night after night as his parents and their friends gathered to preserve the memory of terrifying Stalinist violence, and to expose the continued harassment of dissidents.

When Gorbachev promises glasnost, openness, Pasha, an eager twenty-four year old, longs to create art and to carry on the work of those who came before him. He writes; falls in love. Yet that hope, too, fragments and by 1999 Pasha lives a solitary life in St Petersburg. Until a phone call in the middle of the night acts as a summons both to Moscow and to memory.

Through recollections and observation, Pasha walks through the landscapes of history, from concrete tower suburbs, to a summerhouse during Russia’s white night summers, to haunting former prison camps in the Arctic north. Pasha’s search to find meaning leads him to assemble a fractured story of Russia’s traumatic past.

Kate’s background is in Russian history — she has a Masters degree from Oxford. Of her decision to write fiction, she says in a recent interview, “It was this really overwhelmingly sad story but I could only say so much in a history essay and so somehow I started writing this novel.” In another interview, she explains, “I wanted a way to represent something that has not happened to me but that affects me in its horror. For my [Masters] dissertation I read oral interviews with people who lived under Stalin’s rule, and I read a lot about the dissidents in the 1960s to early 1990s who fought so hard for truth, information, memory.”

Kate’s win was especially close to my heart, as we are part of a reading group (we prefer the term ‘study buddies’) at Monash University, where we are all enrolled as PhD students in Creative Writing. Kate started her PhD six months before the rest of us and has been a gracious and generous trailblazer, not to mention an exemplary student. Having some sense of the hard work and care that Kate has put into The Memory Artist, I couldn’t be more thrilled about her win.

It is exciting to see an Australian literary award given to a novel set outside Australia and without a single Australian character. As Kate says, “Australian literature doesn’t have to be set in Australia. There’s a lot in here [the novel] that echoes important considerations for everyone, about the value of art in particular.”

The Vogel Award is Australia’s most prestigious and lucrative literary award for an unpublished manuscript, eligible for writers under 35. The award has launched the literary careers of Kate Grenville, Tim Winton, Gillian Mears and Andrew McGahan, among others.

I trust that Katherine Brabon’s name will one day be listed as among the luminaries whose writing careers were launched by the Vogel Award.

You can listen to Kate talk about The Memory Artist here.

Angela Savage is a Melbourne writer, who has lived and travelled extensively in Asia. She won the 2004 Victorian Premier’s Literary Award for an unpublished manuscript, and the 2011 Scarlet Stiletto Award short story award. Angela holds a PhD in Creative Writing and currently works as Director of Writers Victoria.
View all posts by Angela Savage →
This entry was posted in Awards & Short lists and tagged Katherine Brabon, The Memory Artist, Vogel Award 2016. Bookmark the permalink.