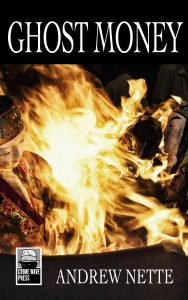 Ghost Money, set in Cambodia, was originally published in the US in 2012. This new release by a publisher based in Asia should ensure it reaches a wider audience of readers in the region. And the new cover design is stunning.

Ghost Money was shortlisted for the Victorian Premier’s Award for Unpublished Manuscript in 2010. In 2011, Andrew Nette was the recipient of an Unpublished Manuscript Fellowship at the Wheeler Centre and Readings Foundation. In the interests of full disclosure, I should also note that Andrew Nette is my partner of over twenty years. But you don’t have to take my word for how good Ghost Money is.

Ghost Money is set in Cambodia in 1996 in the dying days of the Khmer Rouge. Vietnamese Australian ex-cop Max Quinlan is sent to Bangkok in search of missing businessman Charles Avery, only to stumble on to the corpse of Avery’s partner and a trail leading from Avery’s bloodstained apartment to the Cambodian capital Phnom Penh. 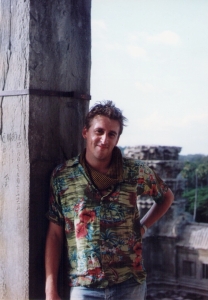 Quinlan soon learns he’s not the only one after Avery. As an outsider whose Vietnamese features makes him suspect in Cambodia, Quinlan needs help to stand a chance of getting to Avery before the others do. He teams up with local journalist Heng Sarin, and together they move between the freewheeling capital to the battle scarred western borderlands, where the mysteries of Cambodia’s bloody past are magnified by the political intrigues of the present.

Andrew wrote the first draft of the novel in 2008 when we were living in Phnom Penh. But as he said in an interview during his Unpublished Manuscript Fellowship at The Wheeler Centre, the story had been inside him for more than a decade.

We first visited Cambodia in 1992 when the United Nations was in charge, civil war still raged throughout much of the country and we had the temples of Angkor practically to ourselves. Four years later, Andrew returned for a few months’ stint as a wire service journalist. While he’d always been fascinated by Cambodia, it was his time there in 1996 that sowed the seeds of the story that ultimately became Ghost Money.

As Andrew says, ‘I always thought Cambodia would be an excellent setting for a crime novel. But I also wanted to capture the broken country that was Cambodia in the nineties, to write about those people trapped in the cracks between two periods of history, the choices they made and what they did to survive.’

Even after multiple readings, I remained riveted by the plot and moved by the story. The novel combines the pace of the best thrillers with a depth derived from the author’s intimate knowledge of Cambodian politics and his efforts to understand its history.

While packing no punches in its depiction of Cambodia’s violent past and present, Ghost Money also pays respect to the resilience of its people, notably in the character of the intelligent and empathetic Sarin, whose ambitions are fettered by his lack of political connections.

‘Things happen there that you couldn’t make up if you tried,’ Andrew says of Cambodia.

He has produced a fiction as strange and compelling as the truth that spawned it.

You can pick up the Kindle version of Ghost Money here. A paperback edition will be available in the near future.

Angela Savage is a Melbourne writer, who has lived and travelled extensively in Asia. She won the Victorian Premier’s Literary Award for an unpublished manuscript, and the Scarlet Stiletto Award short story award. Her latest novel is, Mother of Pearl, published by Transit Lounge. Angela holds a PhD in Creative Writing, is former CEO of Writers Victoria, and currently works as CEO of Public Libraries Victoria.
View all posts by Angela Savage →
This entry was posted in Uncategorized and tagged Andrew Nette, cambodia, crime fiction, Ghost Money. Bookmark the permalink.