The Goddess of Tartan Noir

It was my great pleasure to interview the “Goddess of Tartan Noir” (we all agreed “Queen” was just too, well, royalist) Val McDermid during her recent visit to Melbourne at an event hosted by Sisters in Crime Australia in collaboration with Melbourne’s Athenaeum Library.

All photos by Carmel Shute

Actually, I had the pleasure not only of interviewing Val in front of an audience of around 140 fans, but also chatting with her beforehand in the Green Room and having dinner afterwards together with about 30 other Sisters in Crime.

This was Val’s sixth event with Sisters in Crime Australia. She makes a point of scheduling events with the Sisters whenever she’s in Melbourne and not only that, writes nice tweets about it afterwards:

I love Melbourne Sisters in Crime. Nobody stages a more welcoming event. Thanks @angsavage for presenting & athenaeum library for hosting.

No wonder we think she’s a goddess! 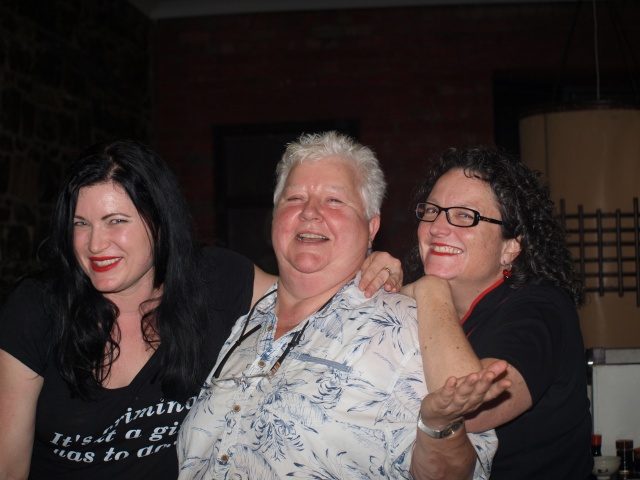 In addition to talking about her wonderful new novel The Skeleton Road, giving us her take on the Scottish Referendum, and discussing rough justice, Val had some great practical advice for writers. This included making regular time to write — whatever time works for you, provided you get the writing done.

Asked about the research she does for her books — and there’s a hell of a lot of it — Val says she reads widely in preparation, then writes without going back to the source material unless it’s to check for accuracy. She suggests the salient information stays with you, and if you can’t remember the detail, chances are it isn’t necessary in the story. I found this idea particularly helpful, given the amount of research involved in my current WIP [Work In Progress] and plan to put it into practice.

And speaking of my WIP, I recently read Blue Genes, the fifth novel in Val’s Kate Brannigan series, which is tangentially related to my thesis topic on commercial surrogacy. Interesting that Val anticipated by several years scientists’ ability to fertilise human eggs with genetic material from cells other than sperm.

Angela Savage is a Melbourne writer, who has lived and travelled extensively in Asia. She won the Victorian Premier’s Literary Award for an unpublished manuscript, and the Scarlet Stiletto Award short story award. Her latest novel, Mother of Pearl, is published by Transit Lounge. Angela holds a PhD in Creative Writing, is former CEO of Writers Victoria, and currently works as CEO of Public Libraries Victoria.
View all posts by Angela Savage →
This entry was posted in Literary giants and tagged Angela Savage, Leigh Redhead, photos, Sisters in Crime Australia, The Skeleton Road, Val McDermid. Bookmark the permalink.

5 Responses to The Goddess of Tartan Noir