Val Down Under: Talking with the Queen of Tartan Noir

Media release from the Sisters in Crime Australia website 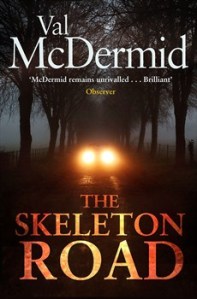 In The Skeleton Road, McDermid, the creator of ITV’s Wire in the Blood, turns her hand to a cold case involving detective Karen Pirie who has the task of identifying decades-old bones discovered hidden at the top of a Victorian Gothic building in Edinburgh scheduled for renovation.

“I’m thrilled to be in conversation with the Scottish Queen of Crime when she visits promote her new standalone novel, The Skeleton Road,” Savage said.

“I’d be terrified if it weren’t for the fact I met Val briefly on a previous visit to Australia and know her to be a warm and witty person, and a strong supporter of Sisters in Crime and women crime writers.”

“As well as interrogating her about her new novel, The Skeleton Road, I’ll be asking Val about violence in crime fiction, being a granny pirate, and whether or not she agrees with our Prime Minister on the issue of Scottish Independence.”

Sisters in Crime Australia has joined forces with the Athenaeum Library to present Val Down Under.

McDermid is the author of 27 bestselling novels, which have been translated into more than 30 languages, and have sold over 11 million copies. She has won many awards internationally, including the CWA Gold Dagger for best crime novel of the year and the LA Times Book of the Year Award. She was inducted into the ITV3 Crime Thriller Awards Hall of Fame in 2009 and was the recipient of the CWA Cartier Diamond Dagger for 2010. In 2011 she received the Lambda Literary Foundation Pioneer Award. She has a son and a dog, and lives with her wife in the north of England.

This will be McDermid’s sixth event with Sisters in Crime.

Angela Savage is a Melbourne writer, who has lived and travelled extensively in Asia. Her first novel, Behind the Night Bazaar, won the 2004 Victorian Premier’s Literary Award for an unpublished manuscript. All three of her Jayne Keeney PI novels were shortlisted for Ned Kelly Awards, with The Dying Beach also shortlisted for a Davitt Award. She won the 2011 Scarlett Stiletto Award.

Tickets may also be available at the door (check websites).

Angela Savage is a Melbourne writer, who has lived and travelled extensively in Asia. She won the Victorian Premier’s Literary Award for an unpublished manuscript, and the Scarlet Stiletto Award short story award. Her latest novel is, Mother of Pearl, published by Transit Lounge. Angela holds a PhD in Creative Writing, is former CEO of Writers Victoria, and currently works as CEO of Public Libraries Victoria.
View all posts by Angela Savage →
This entry was posted in Literary giants and tagged Angela Savage, Sisters in Crime Australia, The Skeleton Road, Val McDermid. Bookmark the permalink.

1 Response to Val Down Under: Talking with the Queen of Tartan Noir