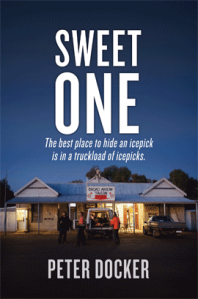 Sweet One is a powerful novel that depicts white Australia’s conflict with black Australia as a frontier war that has never ended, at the same time daring to imagine a day when it might.

Set in the Western Australian goldfields, the story opens with the horrendous, entirely preventable death of a elderly Aboriginal war veteran in custody. Directly complicit in his death are the local state police and the private security officers responsible for prisoner transport. But when the army trained ‘Sweet One’, a man of Wongatha and Afghani descent, starts avenging the Old Man’s death, the lines of responsibility are drawn in wider and wider arcs, raising questions about where complicity ends when it comes to maintaining a status quo that subjects Indigenous Australians to violence, poverty and early death.

Investigating the intersecting stories of systemic injustice and frontier justice is journalist Izzy Langford, daughter of a Vietnam veteran turned cop, girlfriend of an Australian solider on active duty in Afghanistan. Izzy has investigated an Aboriginal death in custody once before, only to have her story killed when the accused cop was acquitted. This same cop subsequently becomes first to die in Sweet One’s campaign.

Izzy was previously embedded with forces in Afghanistan and Pakistan, and the more she learns of black-white relations in outback Australia, the more parallels she sees between the two. ‘It feels like a war. To us it even looks like a war,’ Sweet One tells her.

The young Aboriginal girls being sold for sex by a hotel owner who acts as loan shark to their families reminds Izzy of the teenage girls she saw trafficked as part of the opium industry in the Middle East:

The First World isn’t that different to the Third World. Everything looks different, more opulent — everything except the look in the eye of those who are helpless to resist the power. That look in the eye is the same the world over. A look that Westerners have trained themselves not to see. (p.57)

In the largely corrupt and highly stratified outback towns where Izzy finds herself, no one  can be trusted on face value. When she manages to evade the cops — or are they military? — who would silence her, Izzy is taken in by Queenie and her Aboriginal mob. But Queenie, too, is not what she seems, sharing an elusive connection with Izzy, Sweet One and, it seems, most of the major players in this engrossing drama.

In Sweet One, author Peter Docker looks into the heart of white Australia and finds it conflicted, festering, lacking love for black Australia, and at the same time needing to find that love — ‘to start really looking for our blackness, for our Australian-ness’, as he puts it in the excellent book club notes available from Freemantle Press.

The novel contains numerous statements that read like epiphanies, and yet the combination of intimate characterisations and humour, together with the thriller format, help ensure that none of it comes across as didactic. In one scene, for example, Izzy visits Sweet One’s brother-in-arms, Smokey, at a Perth prison. In the course of their conversation, Izzy mentions Ned Kelly’s famous Jerilderie letter, which sets Smokey off on a story he offers to dictate ‘like Ned’s letter to Joe’.

Smokey speaks of a people thrown up by an ancient country, a people ‘who recognise the country and its indivisibleness from its phenomenal spiritual life’, who ‘survive everything’.

And then, two hundred years ago — we show up. No country, no real Law, swamped in grog, full of greed, and armed to the fucking back teeth. We came here looking for something. Something we lost along the way. But when we found what we were looking for, we were so angry with ourselves that we attacked and destroyed the thing that we came seeking. It makes no diff. In two hundred years we have done our best to besmirch them, belittle them, butcher them, and back them into a corner every which way but loose.
Can you still use besmirch? asks Izzy, daring to look up.
Ned would’ve. (p. 177)

Sweet One is an audacious novel, a hard-boiled read that is both gripping and provocative. It’s the sort of book that should stimulate reflection, discussion, questions and — dare we hope — action.

Sweet One by Peter Docker (2014) is published by Freemantle Press.

Listen to my review of Sweet One on Radio National Books and Arts Daily here.

Angela Savage is a Melbourne writer, who has lived and travelled extensively in Asia. She won the Victorian Premier’s Literary Award for an unpublished manuscript, and the Scarlet Stiletto Award short story award. Her latest novel is, Mother of Pearl, published by Transit Lounge. Angela holds a PhD in Creative Writing, is former CEO of Writers Victoria, and currently works as CEO of Public Libraries Victoria.
View all posts by Angela Savage →
This entry was posted in Uncategorized and tagged Aboriginal Australia, Australia, book review, crime fiction, Peter Docker, Sweet One. Bookmark the permalink.

24 Responses to Review: Sweet One