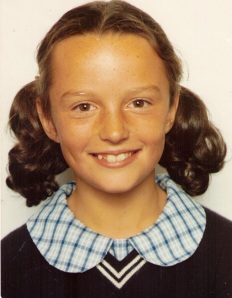 The author in 1976, before braces killed her prospects as a Lao beauty queen

I was a fluoride baby. Before Melbourne’s water supply was fluoridated the 1970s, my pharmacist father was dosing me with little pink pills. Combined with twice-daily brushing, my teeth grew strong and white. And crooked.

My parents subsequently spent a small fortune on braces and I endured two years of pain and discomfort to be transformed from a snaggletoothed teenager into a young woman whose smile revealed perfectly straight, white teeth. Ergo, I was undeniably more attractive.

Or so I thought. My first doubts came when I was living in Laos in the early 1990s. One day I found a stack of postcards featuring portraits of the women crowned Miss Lao New Year in the country’s annual Nangsoukhane beauty pageant. The most recent winner had eyeteeth so prominent  they were impossible to miss. So had her predecessor, and also the previous year’s winner. A local friend explained that prominent eyeteeth in women—deemed by my Australian orthodontist an aberration to be ‘corrected’—was considered a sign of great beauty in Laos.

Sure enough, I remember asking a Lao man in a bar in the capital, Vientiane, why he kept hassling a young woman in our group who was clearly not interested in him. He sighed, ‘It’s her teeth.’

The woman in question had fangs to rival Count Dracula. To think, had it not been for braces, I, too, might have enjoyed such unwanted attentions in Laos. I consoled myself with the thought that at least my teeth, if unfashionably straight, were still attractively white in that part of the world, where so many people’s teeth went grey as a result of being overdosed with anti-malarial medication as children.

Wrong again. At a regional conference with young people from all over South East Asia, it was my grey-toothed Vietnamese colleague with whom the handsome boys flirted most ardently.

1908 postcard of a women from Tonkin (Hanoi) with blackened teeth

I’ve since learned it was once customary in parts of Southeast Asia for people to blacken their teeth. Anthropologists think teeth-darkening practices, such as lacquering and chewing betel nut probably had oral health benefits. But teeth-blackening was also associated with beauty, sophistication and a desire to distinguish oneself from dogs, demons and evil spirits.

New-Zeland born Caron Eastgate James captures this in her 1999 novel The Occidentals, set in 19th-century Siam: “No self-respecting Siamese…would allow his or her teeth to remain white. Some, particularly the wealthier women, used a black pigment to colour any spots that were not perfectly darkened, for—as the old Siamese saying went—’any dog can have white teeth.'”

While the smiles on the current crop of Thai celebrities suggest straight, white teeth are in, and foreign ‘dental tourists’ flock to Thailand to get their teeth whitened at clinics with names like Dental White and Beauty Smile, I can’t help wondering how long the trend will last. And I believe that, for some hilltribe peoples in the region, teeth-blackening has never gone out of fashion.

Speaking of fashion, I recently read in Hannah Kent’s 2013 debut novel, Burial Rites, set in 19th-century Iceland, that snaggletooth was once considered to be “evidence of the devil” along with harelips and birthmarks. I should have stopped there, out of respect for the orthodontics that spared me from an “outward hint of evil”. But, curious to learn more about snaggletooth, I started Googling (as you do), only to discover that snaggletooth is so popular in Japan, people get their straight teeth capped to look crooked, a procedure known as tsuke yaeba (attached snaggletooth). It seems that snaggletooth make the wearer look cute. The trend even gave rise to the formation in 2012 of the world’s first snaggletooth girl group, TYB48. Their debut CD was called Mind If I Bite?

I’m not making this up.

Turns out Japan is also a country where teeth-blackening was practiced up to the early 20th century.

I haven’t the heart to tell my parents they ruined my chances of ever competing in a Lao beauty pageant or joining a snaggletooth girl group in Japan. Or that I might have once been mistaken for a dog in old Siam. I do take comfort, however, in the thought that somewhere in the world at some point in history, my now straightish, whitish teeth with one recessed central incisor will be considered absolutely perfect.

Angela Savage is a Melbourne writer, who has lived and travelled extensively in Asia. She won the Victorian Premier’s Literary Award for an unpublished manuscript, and the Scarlet Stiletto Award short story award. Her latest novel is, Mother of Pearl, published by Transit Lounge. Angela holds a PhD in Creative Writing, is former CEO of Writers Victoria, and currently works as CEO of Public Libraries Victoria.
View all posts by Angela Savage →
This entry was posted in Thailand and tagged Angela Savage, Caron Eastgate Dann, Hannah Kent, Japan, Laos, snaggletooth, Thailand, yaeba. Bookmark the permalink.