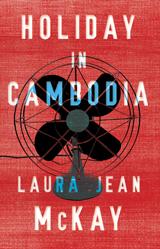 I started this year with a plan for this blog. Each month, I was going to post, in sequence: an update on my writing, an article inspired by my reading, a review of someone else’s book, and a post about something cross-cultural. My best-laid scheme has ‘gang agley’ (‘gone awry’) to paraphrase Robert Burns, but with good reason. I keep reading books I feel compelled to share, the latest being Laura Jean McKay’s breathtaking short story collection, Holiday in Cambodia.

Holiday in Cambodia was not what I expected. Taking its title from a 1980 song by the Dead Kennedys, I assumed the  collection would focus on the foreign tourist experience — a kind of literary travelogue. But while tourists do feature in a couple of stories, these are a long way from travelogue. ‘Route Four’, in which three foolish backpackers take a train through Khmer Rouge held territory, can be read as a metaphor for the dangers of tourism for local people; while ‘Taxi’ is an ugly, if eerily intimate account of an Australian man’s encounter with a Cambodian ‘taxi girl’, so-called ‘because they’re for hire and you can ride them all night long’, as one of the characters puts it.

Of the remaining fifteen stories, seven are told from the point of view of Cambodians, eight from the perspective of expatriates. Many of these stories are so intimate, at times it felt almost voyeuristic to read them. But the combination of compelling characters and crisp prose proved irresistible.

The stories take place in different historical periods. In ‘Breakfast’, a worker in a Cambodian hotel gets her big break as a singer just as the 1969 American bombing campaign known as Operation Breakfast begins. In ‘Congratulations On Your Happy Day’,  the author manages to imagine the unimaginable in this story of forced marriages under the Khmer Rouge in the early 1970s.

‘Holiday, I Love You’, told from the perspective of a garment factory worker, highlights — without a trace of didacticism — the dangers for unionists and labour organisers in present-day Phnom Penh. In ‘Tell Me Where To Run’, an impoverished young boy who sells books on the street is ineligible for subsidised education because of a focus that year on ‘vulnerable orphan girls’ by the international development agency. In ‘A Thousand Cobs of Corn’, a Cambodian mother — whose first child ‘is in ashes at the temple’ — reflects on her job clearing landmines. ‘Massage 8000’ acts as a counterpoint to ‘Taxi’, describing brothel life from the workers’ point of view as a young girl is sold off for the first time. All were among the stories that left the strongest impression on me.

Of the others, ‘Coming Up’ spoke to my experience as an expatriate in Southeast Asia, where you try so hard to be respectful only to have family members and friends stumble in with all their cultural insensitivities — and your local partners love them for it!

I didn’t expect Holiday in Cambodia to blow my mind. But it did.

Holiday in Cambodia by Laura Jean McKay (2013) is published by Black Inc. This review has been submitted as part of the Australian Women Writers Challenge.

Angela Savage is a Melbourne writer, who has lived and travelled extensively in Asia. She won the Victorian Premier’s Literary Award for an unpublished manuscript, and the Scarlet Stiletto Award short story award. Her latest novel is, Mother of Pearl, published by Transit Lounge. Angela holds a PhD in Creative Writing, is former CEO of Writers Victoria, and currently works as CEO of Public Libraries Victoria.
View all posts by Angela Savage →
This entry was posted in Reviews & Interviews and tagged Angela Savage, book review, cambodia, Holiday in Cambodia, Laura Jean McKay, short story. Bookmark the permalink.

7 Responses to Review: Holiday in Cambodia