…and I get to interview him

Alexander McCall Smith is appearing at an event in Melbourne next month and I’m thrilled to bits to have been asked by The Wheeler Centre to interview him.

Alexander McCall Smith is one of the world’s most prolific and most popular authors, loved worldwide for his No. 1 Ladies Detective Agency series, featuring the no-nonsense Precious Ramotswe, Botswana’s leading (and only) female detective, as well as the Sunday Philosophy Club, Scotland Street and Corduroy Mansion series. His books have been translated into over 40 languages; the No.1 Ladies Detective Agency series alone has sold over 20 million copies, and been made into an HBO TV show. 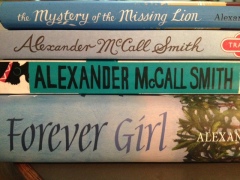 We are especially fond of his children’s books in our household, featuring a nine-year-old Precious Ramotswe, monkeys, meerkats and in the most recent outing, a missing lion.

We’ll also be talking about his latest novel, a standalone called The Forever Girl.

I’ve been watching interviews with Alexander on YouTube in preparation and he comes across as entertaining, erudite and very witty. You are in for a treat if you can make it to the event on Thursday 13 March, 6.30-7.30PM at the Athenaeum Theatre in Melbourne. Click here for information and tickets.

If you can’t make it to the event, feel free to suggest questions for Alexander McCall Smith as a comment on this post. Best question (as judged by me on purely subjective grounds) wins a hardcopy edition of The Mystery of the Missing Lion.

Angela Savage is a Melbourne writer, who has lived and travelled extensively in Asia. She won the 2004 Victorian Premier’s Literary Award for an unpublished manuscript, and the 2011 Scarlet Stiletto Award short story award. Angela holds a PhD in Creative Writing and currently works as Director of Writers Victoria.
View all posts by Angela Savage →
This entry was posted in Uncategorized and tagged Alexander McCall Smith, Angela Savage, Athenaeum Theatre, Melbourne, The Forever Girl, The Wheeler Centre. Bookmark the permalink.