There are many reasons to be excited about being a guest of this year’s Brisbane Writers Festival. For one, I get to spend time with people — readers and writers — who like to talk about books, writing and ideas. For another, I get to appear on panels with some very talented authors (see below). Plus I get to hang out somewhere warmer than Melbourne for a few days.

In preparation for one of my panels, ‘Becoming Local’, I’ve read two terrific books: The Beloved by Annah Faulkner, and My Island Homicide by Catherine Titasey, together with some poems by panel moderator, Jacqueline Turner.

The Beloved by Annah Faulkner won the 2011 Queensland Premier’s Literary Award for Emerging Writer and the 2013 Kibble award for women writing about life in Australia, and was short-listed for the 2013 Miles Franklin Award.

The ‘beloved’ of the title is the child Roberta — aka Bertie, later Lindsay — the narrator, who is aged six when the book opens in Melbourne, 1954, and 14 by the time it ends in Port Moresby, 1962. But the book is about the many loves that compete for space in a life, including the love of art. Bertie is compelled to paint, which puts her on a collision course with her mother, who vehemently disapproves. Bertie’s love for her mother is bigger than she can handle ‘but it wasn’t confident. I didn’t want to test the limits of Mama’s love in case I discovered where it ended.’

Beautifully written and utterly compelling, The Beloved was a book I couldn’t stop reading but didn’t want to end. Fortunately, it has left me with so much to think about, the story will stay with me for some time to come. 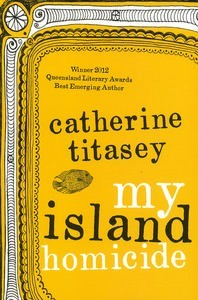 Catherine Titasey won the 2012 Queensland Literary Award for Best Emerging Author for My Island Homicide, a crime novel set on Thursday Island in the Torres Strait. The central character and narrator, Thea Dari-Jones, has fled a humiliating break-up to take up the post of Officer in Charge of the Thursday Island police station. Although Thea’s Islander mother and white father were living on the mainland by the time Thea was born, the posting also offers a chance to reconnect with her mother’s cultural roots.

Thea is soon caught up in an investigation into the brutal murder of a white woman married to a local man, a case that brings her face to face with official corruption, domestic violence, divided loyalties and even maydh, or ‘black magic’.

My Island Homicide effectively combines romance with crime fiction (I refuse to use the term ‘crimance’), while providing fascinating insights into a part of Australia I knew little about.

See below for details of the ‘Becoming Local’ panel and my other Brisbane Writers Festival events.

Becoming Local
Fri 6 Sept, 2-3PM
Can we ever really belong to a community that’s not our home? How do we know when our adoptive communities have accepted us as ‘locals’? Annah Faulkner, Catherine Titasey, Angela Savage and Jacqueline Turner discuss being a stranger in a strange land.
Cinema A, GOMA
Information and tickets here.