It’s my party and I’ll sign if I want to. Photo: Ellie Marney

I was reminded at the launch party for The Dying Beach of the inherent paradox in book launch parties: you invite all the people you love most in the world to come together in the same place at the same time, then spend all night sitting in the corner signing books while they all get to hang out and catch up.

But seriously, as the photos taken by Helen Morgan on the night capture perfectly, I was filled with joy having my family and friends join with me as I launched my third novel last Thursday night at Brunswick Bound in collaboration with Text Publishing.

The Dying Beach was launched by Andrew Nette, both in his capacity as my partner, and also as a fellow crime writer (his Ghost Money has just been long-listed for a 2013 Ned Kelly Award) and co-editor of Crime Factory.

Andrew’s speech was the perfect balance between the personal and professional. Here’s what he had to say about Jayne Keeney PI and The Dying Beach:

Jayne [is] an accidental private investigator, drinker and smoker – believe me that’s no mean feat, given the size and gruesomeness of the health warnings on Thai cigarette packs. She’s an adrenaline junkie with a strong sense of social justice and an even stronger temper. As crime writer Leigh Rehead once said to me, ‘Jayne’s an all round great chick.’ 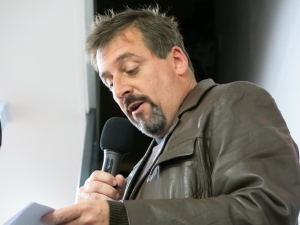 …The Dying Beach takes Jayne in slightly darker territory than was the case in her first two books. She’s investigating a brutal murder amidst the murky world of corruption and environmental destruction in Thailand. Although it seldom makes the front page of the nation’s newspapers, it’s a story that is pretty commonplace in Thailand.

Andrew also spoke about The Dying Beach in the broader context of contemporary crime fiction in Australia:

As a result of many factors, not least of which is our small size population wise, I’ve always thought Australian culture runs on a very narrow gauge. There’s sameness to a lot of the cultural products we produce. In crime fiction, this means many of the books that come out have very standard plots and are very focused on the internal, personally or in terms of being very Australian-centric.

The Dying Beach is very different book. It’s about two engaging characters, Jayne and Rajiv, and their struggle to forge a relationship amid cultural differences and the pressures of being outsiders in Thailand.

But it’s also got a lot to say about the destruction of Asia’s environment, the role that aid and development is playing in this, and the nature of corruption, here and in Asia.

It’s a great addition to what I hope is the growing canon of outward looking crime fiction in Australia. 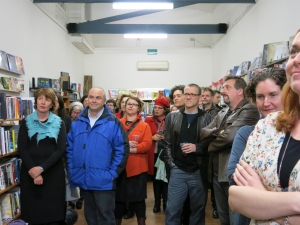 Speaking as my partner, Andrew said:

I can personally vouch for the hard work and dedication Angela puts in…the hours spent writing at the end of a working day, when the last thing she wants to do is hit the keyboard…

She works incredibly hard to give readers an insight into what it’s like to live in Thailand, for foreigners and Thais, with all the blood, sweat, tears, beauty and – as is usually the case for expatriates – embarrassing social faux pas that this can entail.

Being reminded of the hard labour that goes into creating a novel — so easy to forget at the point of celebrating the outcome — made me appreciate the night all the more. 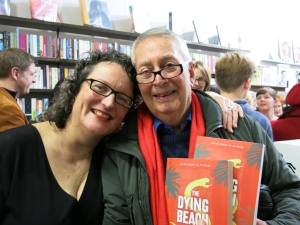 With my father Haydn Savage: The Dying Beach is dedicated to him. Photo: Helen Morgan

As I said in my speech, it was highly appropriate that Andrew launched The Dying Beach, as this novel owes even more to him than my first two books: in addition to his practical and personal support, it was by reading the files he’d kept while working for a Thai environmental organisation in the 1990s that I came up with the plot.

Heartfelt thanks to everyone who came along to celebrate the launch of The Dying Beach — and to those I know would’ve liked to have been there but couldn’t.

I sincerely hope you all enjoy The Dying Beach.

Oh, and if you do, please consider leaving a review on Goodreads, Amazon, Google books, Apple iBooks, Kobo — or wherever the mood takes you.

Angela Savage is a Melbourne writer, who has lived and travelled extensively in Asia. She won the Victorian Premier’s Literary Award for an unpublished manuscript, and the Scarlet Stiletto Award short story award. Her latest novel is, Mother of Pearl, published by Transit Lounge. Angela holds a PhD in Creative Writing, is former CEO of Writers Victoria, and currently works as CEO of Public Libraries Victoria.
View all posts by Angela Savage →
This entry was posted in Angela Savage and tagged Andrew Nette, Angela Savage, Australian crime fiction, Jayne Keeney PI, Thailand, The Dying Beach. Bookmark the permalink.