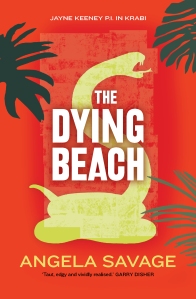 I am excited to announce that the release date for my new novel The Dying Beach has been brought forward to 26 June 2013.

In preparation, the fabulous team at Text Publishing are re-packaging the digital editions of the previous two Jayne Keeney novels, Behind the Night Bazaar and The Half-Child, and releasing them with The Dying Beach as a trilogy and specially priced package. More details to follow closer to release date.

In the meantime, I want to share the spectacular covers designed by über-talented Chong Weng Ho exclusively for the e-book editions of all three novels. 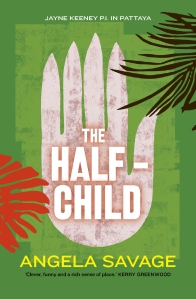 I’ve always felt fortunate to have Chong’s artistic sensibilities brought to bear on the design of my book covers and these images show why. Each cover is stunning in its own right, plus there’s an aesthetic cohesiveness to the trilogy, thanks in part to the recurring palm frond motifs (broad leafed one could even be the Monstera deliciosa featured in Issue 2 of Mongrel by Bernard Caleo).

I’m dead curious to see how that scary snake rearing up against a red background sets the tone for the cover of the paperback version of The Dying Beach. 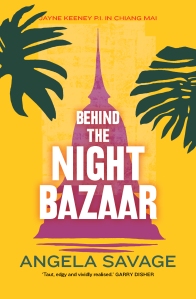 *Taking my lead from Margot Kinberg, this blog post shares its title with a Bruce Springsteen song. Not only is The Boss one of my favourite singer songwriters, he’s the man responsible for my BEST CONCERT EVER, Melbourne, 26 March 2013.

Angela Savage is a Melbourne writer, who has lived and travelled extensively in Asia. She won the Victorian Premier’s Literary Award for an unpublished manuscript, and the Scarlet Stiletto Award short story award. Her latest novel, Mother of Pearl, is published by Transit Lounge. Angela holds a PhD in Creative Writing, is former CEO of Writers Victoria, and currently works as CEO of Public Libraries Victoria.
View all posts by Angela Savage →
This entry was posted in Angela Savage and tagged Angela Savage, Behind the Night Bazaar, Chong Weng Ho, design, eBook, Text Publishing, The Dying Beach, The Half-Child. Bookmark the permalink.

10 Responses to Cover me*