Tin Can Mail and the drive to communicate

Today I delivered a letter to my father Haydn Savage that his father Leslie Savage had written to him almost 75 years ago. I planned to write this up as an example of the enduring power of the written word. But it’s not that simple. The deeper I delved, the more this became a story about the drive to connect through whatever means possible.

The letter came in an envelope with a Tongan stamp and an intriguing array of postmarks, though it was written in Melbourne. Affixed to the letter was an article from The Herald 12 July 1937 inviting stamp collectors interested in obtaining letters with ‘tin can mail’ postmarks to send their envelopes and sixpence worth of stamps to the Union Steam Ship Company. The letters were to be sent on the TSS Maunganui, dropped overboard in tin cans off the Tongan island of Niuafo’ou and returned by the next available ship.

For my grandfather, a stamp collecting, National Geographic subscriber with a passion for what he called ‘the South Seas’, I can well imagine the allure of tin can mail. 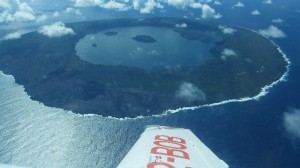 It turns out Niuafo’ou is a remote, volcanic rim island of 15 square kilometres with neither beaches nor harbour. A ten kilometre drop into the Tongan Trench makes it impossible for ships to anchor; even landing a rowboat is difficult in the turgid waters off the steep cliffs.

According to Betty Billingham’s history of the tin can mail, in 1882 the island’s sole white inhabitant, plantation manager William Travers, desperate to communicate with the outside world, petitioned the Tongan postal authorities to seal his mail in empty biscuit tins and have it dropped overboard by passing ships. When the captain sounded the ship’s siren, Travers would send a swimmer out to collect the tin and exchange it for outgoing mail.

Philatelist Janet Klug suggests the idea of the swimming postmen was inspired by the Niuafo’ou islanders’ use of buoyant fau wood poles to support themselves while spear-fishing: ‘The traders thought that if the swimmers could use poles to catch and bring back fish, they could easily use poles to go out to a passing ship and to catch the mail and bring it back.’ 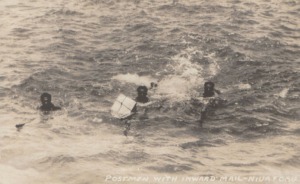 Swimmers could struggle for up to six hours, battling strong currents in shark infested waters to retrieve a mail tin dropped from a ship only a mile off shore. When mail drops took place at night, groups of swimmers would go out, the villagers lighting bonfires on the cliffs to guide them back.

Charles Ramsay, a plantation manager who came to Niuafo’ou in 1921, was the only white man known to swim for the mail, which he did 112 times both by day and by night. I couldn’t find a record of the names of any islanders who swam for the mail, not even the swimmer famously attacked by a shark in 1931, who died after confessing to having tampered with the island’s precious fresh water supply (his death was put down to divine punishment). The Tongan authorities under Queen Salote subsequently insisted future tin can mail drops be collected by outrigger canoe, though this was hardly less hazardous as the canoes had to be thrown into the water from the cliff tops with the crews jumping in after them, and there is evidence to suggest the swimming postmen continued to brave the waters for years to come.

It was German born seaman turned trader Walter George Quensell who recognised the philatelic interest that could be generated by the tin can mail system. In a letter of 23 January 1947 to a friend in California, Quensell writes “I do not claim to be the originator of that same mail, it was started long before I came to “Tin Can Island” that was in 1919. Still it was me that made it known to the world.”

From 1928-29, using a child’s printing set, Quensell produced a rubber stamp to mark his outgoing letters ‘TIN CAN MAIL’. Over the years, his cachets became more elaborate. He ordered rubber stamps from New Zealand with ‘Tin Can Mail’ in multiple languages. He also stamped envelopes with his own name and the title ‘TCM Man’ or ‘TCCMM’ for ‘Tin Can (Canoe) Mail Man’.

Incidentally, the only woman known to ‘swim the mail’ was Quensell’s sister-in-law Pauline Hoeft, New Zealand’s ‘Champion Lady Swimmer’, who held the fifty- and one-hundred yards world records in the early 1920s, was a match for ‘the speediest of male swimmers‘ in the fifty yard open scratch race, and is said to have worked with Johnny Weissmuller, Hollywood’s most famous Tarzan.

At some point, Quensell arranged with ships’ captains for passengers to mail letters ‘in the tin’, enclosing sixpence worth of stamps to cover costs. Quensell would apply his cachets, then send them on. The ships’ captains added their own stamps and cruising by Niuafo’ou to watch the collecting of the mail soon became a tourist attraction. Through an arrangement with the shipping companies, Quensell’s offer was extended beyond passengers to stamp collecting enthusiasts like my grandfather. In the 27 years he spent on the island, Quensell estimated he sent 1.5 million letters to 148 different countries.

Yet tin can mail was never just a gimmick. Until an airstrip was constructed on Niuafo’ou in 1983, it remained the only way for residents to send and receive mail.

My grandfather’s letter clearly made it to Niuafo’ou, as the envelope is stamped with multiple cachets including TIN CAN – CANOE MAIL: ISLAND, which is unusual as Quensell was said to have cut out the word ‘canoe’ from all rubber cachets from mid-1935 following a dispute with the swimmers. But why the letter never made it back to the addressee, my father Haydn, remains a mystery.

Indeed, the letter might never have reached us but for the unusual note on the front top left corner: ‘To be opened on 12th Sept 1952.’ In a move typical of my beloved late grandfather, he’d written the letter to his son, then aged not quite two years, and marked it to be opened on what would have been my father’s seventeenth birthday.

The note piqued the curiosity of a Gold Coast couple who acquired the ‘cover’, as they are known to philatelists, as part of a bulk lot bought at auction. Though covers have a much higher value if they remain unopened, the couple took a chance on finding something of interest, that might also help them locate the intended recipient or his family.

“As it turns out it had a most beautiful letter inside,” they wrote to me in January 2012. “We are so glad to have located its rightful owner – such lovely words deserve to be with the intended recipient.” 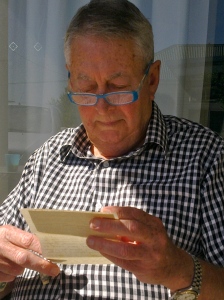 Haydn reading a letter from his father, 75 years after it was written

They found me on the internet, of course: the previous month I’d written a post to commemorate the first anniversary of my paternal grandmother’s death and tagged it with my father’s name.

Thus the letter travelled via air, ship, tin can, canoe, email, registered mail and train to finally reach its intended recipient nearly 75 years after it was written. The cover probably changed hands many times over the years among philatelists. I was surprised to learn that attempting to return mail to the intended recipient is frowned upon by collectors and dealers who (legitimately) purchase items like Tin Can Mail covers to keep or re-sell at a profit. We were fortunate the last owners didn’t subscribe to that view and elected instead to connect.

After all, what child of any age wouldn’t cherish the chance to read the following:

At the moment you are 1 year & 10 months old and playing happily around me — a constant joy to your loving mother & I. In two months time you will be two years old. Easily the most marvellous years of our life…I know you will always love your Mummy and Daddy and they only live for you.

And from Haydn: ‘My father did this to me all my life, post-dated mail by many years, then refused to let me open it on the date! I was really thrilled to read the contents of this one.’

45 Responses to Tin Can Mail and the drive to communicate