In 2001, the Sisters in Crime Australia celebrated their tenth anniversary by holding the country’s first crime convention in the St Kilda Town Hall in Melbourne; hence the name, SheKilda.

Rumour has it the SheKilda organising committee took a decade to recover from the experience, but the good news is SheKilda is happening again. To celebrate Sisters in Crime Australia’s 20th anniversary, SheKilda Again Women’s Crime Writers Convention will take place from 7-October 2011 at Rydges Hotel in Carlton.

(Sadly, the Sisters rejected my suggestion to call the convention SheCarkedIt in light of the change of location).

I’ll be attending some fabulous sessions (see here, here and here for examples), not to mention the 2011 Davitt Awards ceremony on the night of Sat 8 October at The Celtic Club, with special guest presenter Shamini Flint. The Half-Child is among the books nominated for a 2011 Davitt Award for fiction. 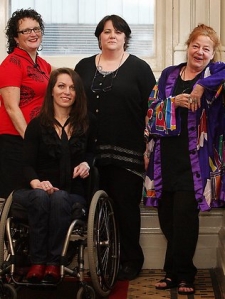 I’ve been doing a bit of media to promote SheKilda, which included the photo shoot for the Melbourne Times Weekly featured above. I got to play in the oldest part of the State Library of Victoria with my sisters in crime PD Martin and Leigh Redhead, and props including guns, daggers, a wrench, rope and candlestick. (We didn’t use the lead piping – too close to the bone with the Carl Williams trial in progress). It was Cluedo meets Charlie’s Angels — the most fun I’ve ever had doing media of any kind. A terrific article, Once upon a crime, by Stephen A Russell accompanied the photos.

PD (Phillipa) Martin’s account of the morning is The photo shoot to kill for.

I’m in a less dramatic group photo with (above, L-R) Honey Brown, Lindy Cameron and Kerry Greenwood, taken for an article called ‘She Dunnit’ that appeared in the Herald-Sun on Sat 1 Oct 2011 to promote SheKilda. And Melbourne-based crime writer Carolyn Morwood, a guest of SheKilda, is interviewed here.

Hope to see you at SheKilda, a stunning once-in-a-decade event. See here for single session tickets or register for day passes here.